‘It’s an exact, exact replica of my first Gibson, which I had on the first four albums,’ guitarist says

When Black Sabbath entered the studio to record their monumental first album in 1969, guitarist Tony Iommi faced a serious setback early in the session.

After tracking the first song, “Wicked World,” the pickup went out on his favorite guitar, a Fender Stratocaster he’d heavily modified to accommodate the thimbles he had to wear on his fretting hand after he’d lost his fingertips in a freak industrial accident. “In them days, you couldn’t go, ‘Oh, I’ll go and get another one from the guitar shop,’ or get somebody to bring one over,” Iommi tells Rolling Stone. “They didn’t do it like that.” So he picked up his standby guitar, a red Gibson SG.

“Because we were in for only the day to record, I had to use the Gibson,” he says. “I thought, ‘Oh, no. It’s just typical.’ ” He laughs. “But I had worked on the Gibson a bit, so it felt normal for me to play. So I ended up doing all the rest of the songs from the first album on the Gibson. And that was it. I never looked back. I just stuck with the Gibson then.” It became the instrument he’d use for much of the Seventies.

Now, Gibson has gone to painstaking lengths to recreate the instrument that defined Black Sabbath’s sound. The company claims that the Tony Iommi “Monkey” 1964 SG Special Replica, which will come out later this year, is an exact copy of the iconic instrument. Gibson reverse-engineered the instrument, studying its construction and aging, and mimicking details like its zero fret, “stop tailpiece brushings,” and, of course, the primate decal that gives it its name. The pickups were handmade by an apprentice of the late pickup guru John Birch, with whom Iommi had collaborated.

“It’s an exact, exact replica of my first Gibson, the red one, which I had on the first four albums,” Iommi says. “I’m really amazed how they’d done it.”

Iommi says that the instrument gave him a thicker sound on the first record — it originally had stock P-90 pickups — and that as time went on, he customized it further, working with Birch. The replica reflects all of the modifications he made in the years since. “The guitar they’ve done now, I can’t tell the difference from the original one to the replica one,” Iommi says. “It’s just really great. I’ve got it in my bedroom now. That’s the one I’ve been playing every night. I get up and play for a bit, and I really like it.”

The reason Iommi agreed to work with Gibson on such a unique collaboration, he says, is because of the way the company has changed for the better in recent years. He’d felt that the company’s previous owners weren’t always so welcoming — “The old owners didn’t want the people to look up when you walk into the factory, and that was quite a funny vibe,” he says — so he started working with different guitar companies. The new owners, he says, have an enthusiasm for what they’re doing. 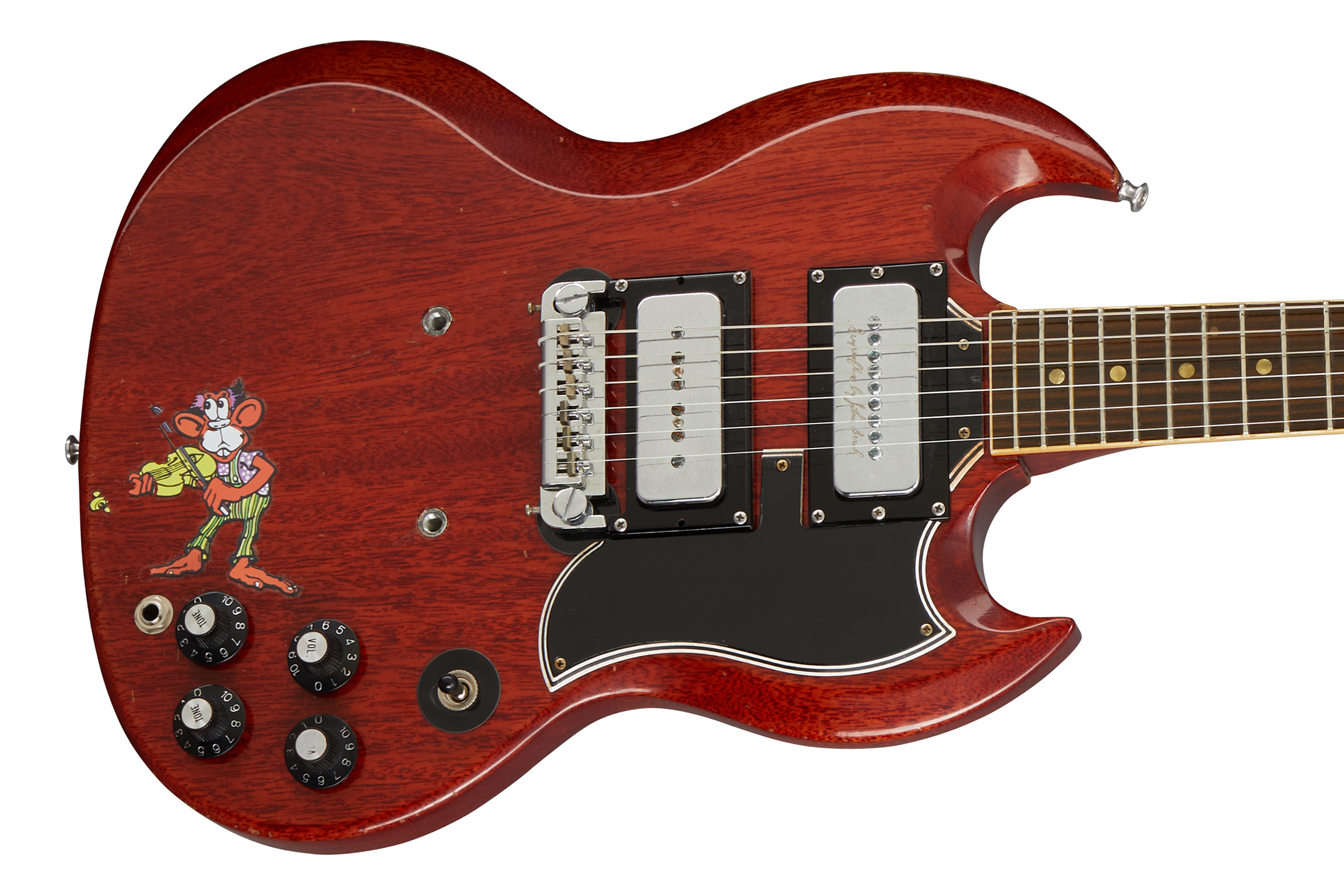 “They believe in the product,” he says. “They want to make everything as good as they can. And I was really impressed, very impressed. I went all around the workshops and met all the people, which you’d never been able to do before.… I’m looking forward to working with them. And it’s been great having them do the replica of the original one.”

The company has yet to reveal a price for the instrument, but it’s bound to be expensive. Gibson is making only 50 replicas — 25 left-handed models (Iommi is a southpaw) and 25 right-handed ones — and each are signed and numbered by Iommi. The guitars will also come with a replica of Iommi’s cross pendant, a coffin case, a replica of Iommi’s leather touring strap, and a remake of the kinds of cases Gibson used in the Sixties.

As for the fate of Iommi’s original Strat, it’s been lost to time. After he switched to the SG, he traded the instrument for a saxophone, and he says, “I drove the rest of the band mad by trying to learn to play this sax.” Eventually, he got rid of the woodwind. Sabbath’s bassist, Geezer Butler, at one point spotted the Strat in a pawn shop in Birmingham, England, and intended to buy it for Iommi as a surprise, but it was gone by the time he got there with the money. “I would have loved to have got that back,” Iommi says. “I never even heard of it or seen it since. But the Gibson became my guitar.”