He’s had the brush-off from Lemmy, a bollocking from Freddie Mercury, and Kurt Cobain was rude about him. He is Europe frontman Joey Tempest, and these are his stories 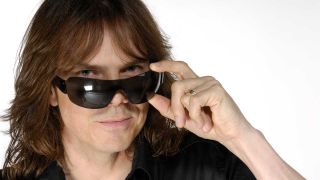 As the singer with Swedish rockers Europe, Joey Tempest (aka Rolf Magnus Joakim Larsson, born on August 19, 1963) shot from virtual unknown to overnight international fame (albeit brief) in the winter of 1986 on the back of the band’s now signature hit The Final Countdown, which galloped up charts around the globe.

Europe as a band had been around since the late 70s, but it wasn’t until The Final Countdown, and its infuriatingly brilliant synth hook, that they achieved any real recognition outside Sweden. It’s a success story they’ve since been unable to match, although their most recent album, 2017’s Walk The Earth, is a definite return to form.

Thin Lizzy did a secret club gig in Stockholm in 1983. I was 20 years old and Europe’s first album had just been released. Tony Reno [original Europe drummer] and I stayed on afterwards. I was amazed to see Phil alone in the corner of the dancefloor, looking very sad with his head down.

A friend of mine, the photographer Denis O’Regan who worked a lot with Lizzy, later explained that was one of Phil’s tricks to get the interest of girls. And it worked, because a few girls came up to him.

Nervously, as he is one of my heroes, I went over and spoke to him with a question about why Thin Lizzy never had an actual lead singer. Fortunately, Phil was incredibly sweet and friendly. It meant so much to me, that’s how I always try to treat fans myself.

A couple of us from the band met him at his second home, the Rainbow [Bar & Grill on Sunset Strip in LA]. He was playing the pinball machine, as ever. Somebody said: “Hi, we’re from the rock band Europe.” Lemmy didn’t even look up. He just replied: “Europe’s not a rock band.”

Such a cool reply. We were absolutely stunned. But we laughed about it and got on fine. A few weeks later we got our own back when Kerrang! famously reviewed one of our gigs and said that we were “louder than Motorhead”.

That was once again at the time of The Final Countdown. There used to be a famous TV programme in Germany called Peter’s Pop Show. It was huge; 40 million viewers or something.

We did The Final Countdown – which was absolutely massive in Germany at the time – at the soundcheck in the afternoon. We were set to open the show and Billy Idol was meant to be second. He did it that way in rehearsal, but during the actual filming he said: “No, I just can’t go on and follow that song.” The audience had gone so crazy.

At a show in San Francisco on the Final Countdown tour, Tommy and Vince came to the dressing room to say hi. They were like high-spirited schoolboys; I really liked them. In the middle of it all, Vince said: “Hey, next time let me drive you around the city and show you around.” This was one year after the car accident [in which Hanoi Rocks drummer Razzle died]. We were like, er… yeah. Thanks.

I’m afraid we pissed Freddie off. We were at Townhouse Studios [in London], sound-checking Ian Haugland’s drums with producer Ron Nevison for the Out Of This World album [1988]. All of a sudden this face, a bit red, appeared and announced: “You must be joking.”

Freddie was in the room next to us, trying to record some opera music, and we hadn’t closed the door properly. He said: “Your drums are going straight into our mixing console. Would you please keep it down.” Very posh, very eloquent, but quite annoyed.

Europe were Def Leppard’s special guests on the American leg of their Hysteria tour. It was summertime, Pour Some Sugar On Me was a Number One single, everywhere was sold out, and there were some of the wildest parties in rock history.

At one Oklahoma venue, just in order to get in, you had to remove your top – males and females. There was also a giant pig walking around. Various people from various professions were in attendance… I’d better watch what I say.

Joe Elliott has since said that Europe are the wildest partying band he’s ever known. While most LA musicians start behaving oddly after three Coors Lites, for us downing 15 pints on a Saturday night is no problem. Maybe it’s a Scandinavian thing.

Jon and I have had a few encounters over the years. The first time was at Top Of The Pops. The Final Countdown was Number One and I think Livin’ On A Prayer was in the Top 10. Although the media probably perceives there to be a bit of a rivalry, we always get along great. On one occasion in Japan we sang a song together – Get Back by The Beatles – at a Tokyo band competition.

There’s a lot of mutual respect, and we grew up listening to most of the same bands; people like Thin Lizzy. The press always put us on the same page. And I have been mistaken for Jon Bon Jovi, but not so much these days. It used to happen on the street quite a lot. Someone screams: “Hey! Jon Bon Jovi!” I just smile. It’s kinda funny.

I’m told that he wrote ‘Who the fuck is Joey Tempest?’ on a wall at Oakwood Apartments when we stayed in LA recording the Prisoners In Paradise album in late 1989. If it’s true, it’s kinda flattering. And very funny that he would take one second to even think of me.

This one also took place back in those days in LA, working on Prisoners In Paradise. We were 20 minutes away from the studio, and there were two rental cars which were always occupied by other band members. So I had this dilemma: how to get to the studio.

At the time, everybody thought it was cool to ride a Harley-Davidson, including Mike Tramp and the White Lion guys, who also used the studio. I wasn’t so convinced. So I found this advert in the LA Times from an old lady who was selling a little yellow moped which I bought off her for $50.

It moved so slowly, but it got me around brilliantly. I rode it to the studio each day and parked it outside, right next to the Harleys. It got lots of laughs and probably annoyed a few people, but I didn’t care.

I met James while Metallica were doing their Black album [1991]. I told him we were working on an album of our own; we were just about to add some “big-ass background vocals”. He looked at me confused. “Background vocals?” Metallica don’t even use those. So I gave up and we spoke about something else.

I met him as the 1980s gave way to the 90s. To me, Guns N’ Roses were a very important band because they had a foot in both of those eras of music. We played two nights at the Budokan [in Tokyo], and around the same time they played two nights there as well. We went to their show and they came to ours.

We still had that 80s production, a really huge show, whereas they had just a few lights. They didn’t even have a set-list, they’d just go back to Steven Adler’s drum riser and work out what to play next. But they were great.

Everyone ended up at the famous Lexington Queen bar. It was a bizarre night. The beer ran out right away. By four or five in the morning it got completely out of hand. I met Axl in the bathroom and he was pretty friendly, and we spoke for a while about the Bermuda Triangle, of all things. But for most of the night he sat in the corner by himself wearing a fur coat.

We used to work a lot in France and Germany and would bump into David everywhere. He invited us to Malibu Beach to where Baywatch was filmed. He was a very relaxed and pleasant guy. I haven’t seen him in a while.

I’m a big fan of The Sweet’s Desolation Boulevard and Sweet Fanny Adams albums [both 1974], and I met [Sweet singer] Brian at the time of The Final Countdown. He really liked Europe’s music. It was funny to receive advice from him: “Joey, when you go out there, hold the mic stand up over your head and keep it there for a long time.”

Brian had some problems at the time. He had a lovely lady with him, maybe it was his wife, who tried to prevent him from smoking and drinking. She managed it on the first night, but the second time we met it had all gone to pot. She was trailing after him, not having much success.

When it comes to successful songwriters, Abba’s Björn Ulvaeus and Benny Andersson are top of the league. So when people like that give you advice you’d better heed it, right? Ha ha ha… not Europe.

We met them quite early on, circa The Final Countdown. They made a point of advising us to spend as much time on the actual recording process – those records of theirs were masterpieces – and not to bother so much with touring. And of course, being Europe, we took that advice on board and then did the exact opposite. We spent most of the next three years on the road.

The original version of this feature appeared in Classic Rock 143, in February 2010.